Sarah’s dad, Martin, needed an MRI. She knew the test was safe for most people. However, Martin had an old tattoo on his bicep from his days in the army. Sarah had read all sorts of stories on the Internet about people with tattoos having reactions, like burning and pain. As Martin’s primary caregiver, Sarah wanted to do what was best for him. She wondered if the MRI was safe or if she should talk to the doctor about other testing options. 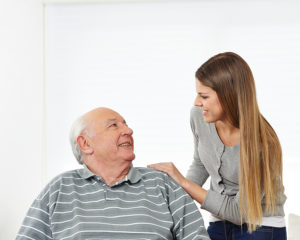 While Sarah’s question may sound odd to some, it’s not so unusual or even out of line. The truth is that some tattoo inks can be problematic for people during an MRI, but a new study shows that there’s not much need for caregivers to worry. MRIs are probably safe even if your aging parent does have a tattoo.

MRI stands for magnetic resonance imaging. It’s a test that uses a magnetic field to give doctors a view of the body’s organs and tissues. When your parent has an MRI test, they’ll lie still inside a large tube while the machine temporarily changes the arrangement or hydrogen atoms inside their body. These realigned atoms send out signals that make it possible to create cross-sectional pictures of the inside of the body. They can also be used to produce 3-dimensional images. The images give the doctor a way to look at what’s going on inside the body in a non-invasive way.

The MRI and Tattoos Study

According to the Food and Drug Administration (FDA), people have made complaints concerning swelling and burning in areas where people had tattoos when undergoing an MRI. The ink can also cause poor image quality. However, the FDA states that these complaints are rare.

When tattoos do cause a problem, it’s probably because of the iron oxides found in some inks. Because they are metallic, they react to the magnetic field of the MRI. They may create an electrical current, which is what leads to burns and distorted images.

In the recent study, researchers in Europe examined 330 participants with a total of 932 tattoos after having an MRI. Most of the tattoos were comprised entirely of black ink, but all colors of ink were represented. Most of the study participants had no ill effects from the MRI. Researchers stated there was only one participant whose tattoo was affected. The participant reported a tingling feeling in their skin that the researchers determined was related to the scan. The feeling went away in 24 hours. Based on these results, the researchers believe the risk associated with an MRI are very small.

For caregivers, knowing that there is little risk to your elderly parent having an MRI because of a tattoo can take one more worry off your plate. Still, caregivers should be aware that having metal implants or other devices in the body can be unsafe. Talk to the doctor if your parent has had a joint replacement, a pacemaker, or other types of medical devices in their body.

I started my career as an ICU nurse over 30 years ago. I have functioned as an educator and preceptor mentoring new nurses in the clinical arena. I have sat on many Patient Care committees authoring a variety of patient care protocols.

In 2007, I saw an opportunity to improve the delivery of patient care services in the home and founded Caring Solutions Home Care. Over the last 10 years I have functioned as the Director of Nursing overseeing all client care, administrative and personnel operations.